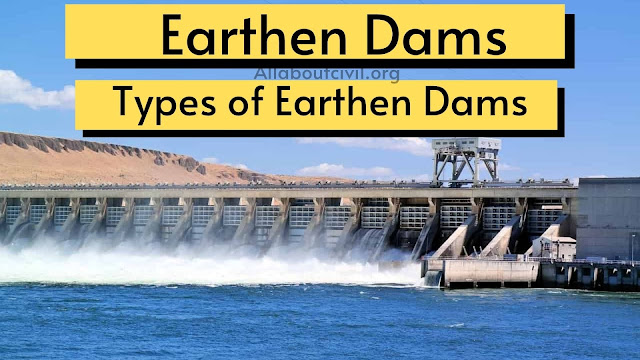 They are most suitable for the sites where the required foundation at reasonable depth is not available for a masonry / concrete dam. Recently, composite earth and rock-fill type of dams are widely adopted in which quarried rock is used along with soil for construction.

Earth dams are being used since ancient times. But their design and construction was based on empirical methods and the experience gained from similarly constructed dams. The recent advancement in the knowledge of the properties and behavior of soils made it possible to design and construct them with more certainty and confidence.

Tarbela Dam is the Largest earth dam in the world with length 2.743km and total capacity of 13.69km3

Types of Earth Dams based on method of construction

These are constructed in successive, mechanically compacted layers. The material is transported from the borrow pits to the dam site, spread to form layers of 15 cm to 45 cm thickness. Each layer is then thoroughly compacted and bonded with the preceding layer by means of rollers.

these are classified into three more types based on section which are explained below with figures.

The coarser material is deposited near the faces and the finer fraction flows towards the center of dam section. This method provides an earth dam of coarser shoulder (outer shell) with impervious core.

These are constructed similar to rolled fill type dams by dumping the material directly procured from the borrow pits. However, some part of the material is moved to the final position by the action of water. Water jets are used to move the fine material from the face of the dam towards the center.

Out of these three types of dams, rolled fill type dams are most commonly adopted. Because in the case of other two types, lack of control in placing the material may result in the failure of dams.

Types of Earth Dams based on section of dam 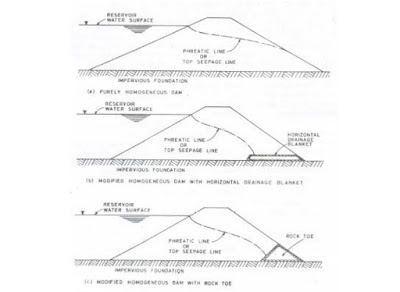 These types of dams are composed of a single material that is available economically in the nearby sites.

These dams are used for low to moderate heights. The soils used are impervious or semi-impervious soils. With the provision of horizontal drainage blanket or a rock toe or both, homogeneous type dams can be used with steeper side slopes.

Above figure shows the different types of homogeneous earth dams. 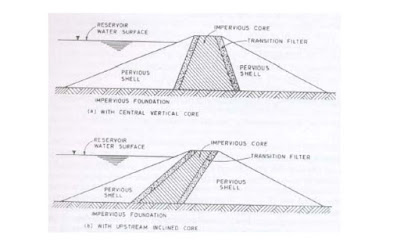 In general, a dam is considered as zoned type dam if the horizontal width of the impervious core at any elevation is equal to or greater than the height of the dam above that elevation or 3 m whichever is greater.

In between the impervious core and pervious outer zone the transition filters or layers are provided for gradual change in the permeability for the seepage of water. Sometimes, the upstream inclined core may also be provided which help in the construction of downstream portion at earlier stages.

Zoned earth dams with central vertical core and upstream inclined core are shown in the above Fig.

These types of dams are used when enough quantity of pervious material is available while the material required for the impervious core is limited.

In such case, the central zone of thin section (width at any elevation less than 3 m or height of dam above that elevation) called diaphragm is provided, which is surrounded by previous material. The diaphragm may be provided with rigid material like impervious soil, cement concrete, bituminous concrete, etc. 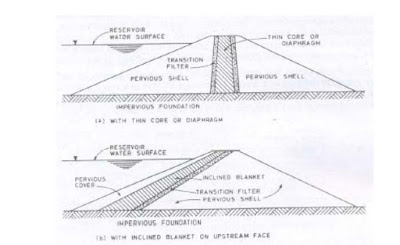 The diaphragm may be constructed either at the center or on the upstream face or in between these two positions as you can see in the above fig. However, construction of these types of cores require high degree of precision and control as they have disadvantages of being ruptured due to settlement of dam or its foundation. As such theses dams are used for small heights only.

What are Spillways? Types of Spillways

What are the Causes of Failure of Earthen Dam