The methods of application of pre-compression (pre-stress) to concrete can be broadly classified as below:

This method involves generation of compressive force between the structural elements and its abutments using flat jacks. A member can be prestressed by external reaction offered by rigid abutments. For a simply supported beam external prestressing can be done by jacking against abutments.

Such an arrangement, however, cannot be easily accomplished in practice as even if abutments favorable for such a layout are obtainable, shrinkage and creep in concrete may completely offset the strains unless they can be readjusted. This type of pre-stressing is probably suited for arch bridges having rigid abutments.

In internal prestressing method, the prestress is provided by tensioning longitudinal high tensile steel embedded in concrete or housed in ducts, accordingly they are called Pre-tensioning and Post-tensioning. This method is most common because greater degree of accuracy can be achieved in execution.

Pre-tensioning is an internal method of prestressing in which the high tensile steel is stretched between two bulkheads in a prestressing bed. Concrete is then cast around the tensioned tendon, in required shape, when the concrete attains sufficient strength, the wires are released, which results in transfer of prestress to the concrete member. Here the force is transferred by bond between steel and concrete.

In post tensioning, firstly the structural elements are cast with longitudinal ducts for prestressing tendons to run through. The ducts are provided with metal sheathing placed in proper position and they are called cable ducts.

The prestressing steel tendons are inserted through cable ducts later. After the concrete attains the required strength, the prestressing steel tendons are pulled against the concrete element and anchored at the ends by means of special type of patented external anchorage systems. The force is transmitted through  external anchorage system at the ends of the structural concrete element.

The method of prestressing by heated tendons, achieved by passing an electric current in the high tensile wires, is called Thermo Electric Prestressing. By this process it is possible to induce initial stress of upto 500 to 600 MPa in the steel.

The method, developed by French engineer Freyssinet is one of the most widely used method of prestressing and is based on wedge action of anchorage. The system consists of two parts. (i)the female cone, (ii)the male cone. The female cone is a precast RCC cylinder having corrugations on the outside, conical hole in the center and a heavy hoop reinforcement. The male cone is a precast RCC conical plug, cast around a steel tube as shown in figure, the male cone has longitudinal groves numbering from 8, 12 or 16 on its surface so that the high tensile wires (5mm or 7mm in dia) rest in  these grooves while tensioning.

The female cones are placed in position at each end of the beam. When concrete is placed in the formwork, the female cones get embedded in the concrete and on account of their corrugated outer surface they get well bonded with the concrete when the member is cured and hardened. After the concrete sets and attains required strength, the tendons are tensioned by using Freyssinet jacking unit wires or tendons of cable are passed through the grooves of male cone. These wires are gripped by the wedges on the main piston of the jack.

In this system, the anchorage consists of steel plates called sandwich plates with two trapezoidal grooves in the upper surface and two in the lower. Each groove can hold two wires and the wires are held in position by a steel wedge, which fits in the slot. Thus, in a sandwich plate 8 wires can be anchored and a cable anchorage system may be built up of a number of such plates, laid one over the other.

With the help of tensioning device wires are tensioned one at a time. The sandwich plates are placed in the form of bank one above the other against a distribution plate and held thus by means of a temporary bolted clamp during tensioning operations. For stressing the wires hydraulically operated stressing jacks are used with arrangement of holding two wires at a time.

When the wires have been tensioned to the desired limit, the steel wedge is derived home inside the groove which holds the two wires firmly in position. Thus the anchorage assembly transfers the prestressing force to the precise concrete members through the cast steel distribution plate interposed between the anchorage assembly and the end face of the member at each end. Thus sandwich plates extend beyond the end of the concrete as shown in fig. when the stressing in completed, it is invariably grouted and the anchorage is covered with concrete for protection.

1.The cables are stressed uniformly as two wires are stretched at a time.

1.It takes more time than Freyssinet system and sandwich plates extend beyond the end of the concrete.

The Gifford-Udall (C.C.L) system developed in U.K. consists of steel split-cone and cylindrical female-cone anchorages to house the high-tensile wires bearing against steel plates. Each wire is tensioned separately and anchored by forcing a sleeve wedge into a cylindrical grip resting against a bearing plate. The ducts are generally formed by metal sheaths cast into the concrete member. 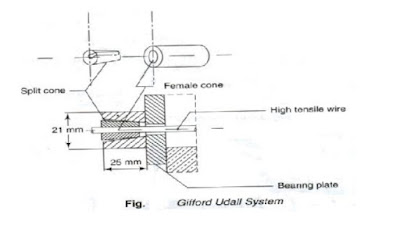 The cable consists of parallel wires of 7mm dia. The cables are separated by means of circular spacers placed about a meter apart. The first and last spacer lie at about 50cm from ends. Toprevent the spacers to shift their positions, the cable is tied by a thin wire all-round behind each spacer.

There are two types of Gifford Udall anchorage systems

The Hoyer system consists in stretching the wires between bulkheads several meters apart (100 to 150m) The bulkheads can be anchored to the ground independently or they can be connected by along stressing bed.

1.  It is suitable for mass production of small members.

2. Rigid quality control under factory conditions can be ensured.

What is Curing?| Types of curing methods for concrete