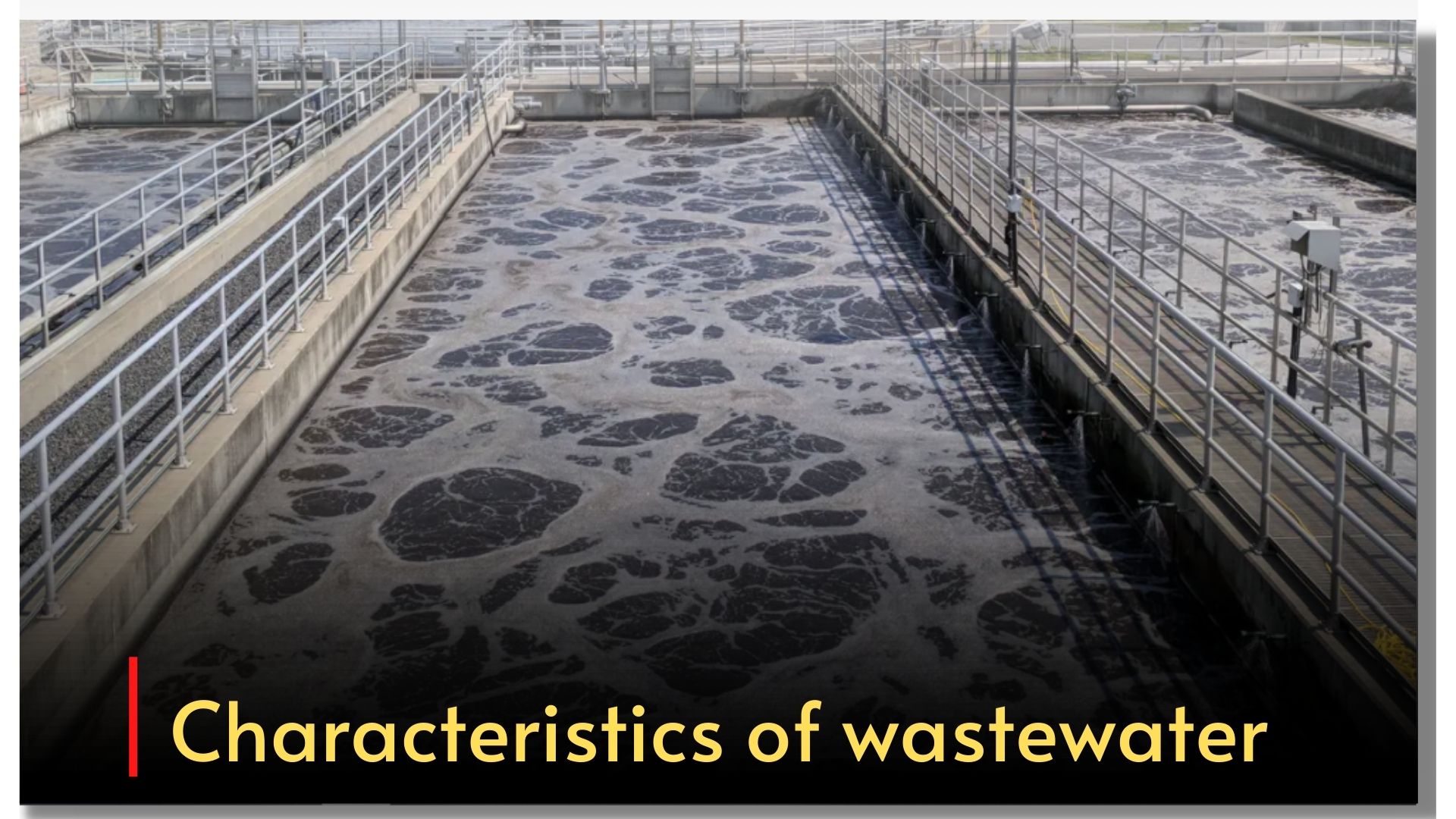 Wastewater is nothing but any normal or fresh water which is contaminated with waste’s from domestic, humans or any industrial.

Which are basically not suitable for any kind of usage unless they are treated at wastewater treatment plant’s or units.

Also Read: What is sanitary engineering?| Definitions of some common terms

Characteristics of wastewater can be classified as:

Fresh domestic sewage is grey, with the passage of time as putrefaction starts, it begins to get black.

Normal fresh sewage has a musty odour which is normally not offensive, but as it starts to get stale, it begins to give offensive odour.

When all the oxygen present in the sewage gets exhausted and it starts emitting offensive odour of hydrogen sulphide gas & other sulphur compounds produced by anaerobic micro-organisms.

Generally, the temperature of wastewater is higher than that of the water supply due to addition of warm water from the households & from industries.

When the wastewater flows in closed circuits, its temperature rises further.

Average temperature of wastewater in India is around 200C, which is quite close to the ideal temperature for the biological activities.

It is a measure of light-emitting properties of wastewater & turbidity test is used to indicate the quality of waste discharges w.r.t colloidal matters. The turbidity depends upon the strength of the sewage.

The test for pH value of wastewater is carried out to determine whether it is acidic or alkaline. If there is a high concentration of either an acid or alkali in wastewater it is a indication of industrial wastes.

Chloride in natural waster result from the leaching of chloride containing rocks & soils with which the water comes in contact. Chlorides found in domestic sewage is derived from kitchen wastes, human faeces & urinary discharges.

1. Ammonia Nitrogen or Free Ammonia: It is the very first stage of decomposition of organic matter. It exists in aqueous solution as either ammonium ion or ammonia depending upon the pH.

2. Organic Nitrogen: It is determined by Kjeldahl method. The sum of organic & ammonia nitrogen is called Total Kjeldahl nitrogen

3. Albuminoid Nitrogen: The quantity of nitrogen present in wastewater before the decomposition of organic matter is started. It indicates the amount of under composed nitrogenous material in the wastewater.

It is mainly contributed from kitchen wastes like butter, vegetable oils & fats. It is also discharge from industries like garages, workshops, factories etc. They interfere with biological action & cause maintenance problems.

It comes primarily from synthetic detergents. They are discharge from bathrooms, kitchens, washing machines etc.

Phenols are found in industrial wastewater, if it is directly discharged into the rivers it causes serious taste problems in drinking water.

Sulphates & sulphides are formed due to decomposition of various sulphur containing substances present in wastewater.

Anaerobic bacteria chemically reduce sulphates to sulphides and to H2S.

Some other common gases like Carbon-di-oxide, Hydrogen sulphide, methane, ammonia, nitrogen, oxygen can be found in untreated wastewater.

It can be said as the amount of oxygen required for the oxidation of carbonaceous matter.

Dissolved oxygen is the amount of oxygen in the dissolved state in the wastewater.

Wastewater generally does not have Dissolved Oxygen(DO), Presence of DO in untreated wastewater indicated that the wastewater is fresh.

The biological characteristics of sewage are related to the presence of micro-organisms.

The work of the aerobic bacteria i.e. combination with oxygen is called oxidation.

Aerobic bacteria utilize free oxygen as an electron acceptor. The end products of aerobic activity are CO2, H2O, SO4, NO3, NH3 and more bacteria.

Though each of the above two processes work in opposite direction the former by splitting up & the latter by building up, there is co-ordination between two.

In the first stage, the anaerobic bacteria decompose complex organic matter into simple organic compounds while in the second stage; the aerobic bacteria oxidize them to form stable compounds.

Also Read: What is Sewerage? Different Types of Sewage system

What is screening in water treatment? | Types of Screens